I took an extra day off prior to the Thanksgiving holiday and was able to get a four night trip together. We wanted to go back to the Lostmans River as it had been close to four years since we last paddled through it. We’ve been occupied with the Flamingo area and the middle rivers but the Lostmans Loop remains one of my favorite trip plans. Since our days are few we wanted to pack as many miles as possible. This would leave only two days of fishing opportunities, the mouth of Lostmans River and Gopher Creek. We also wanted to climb back up to the old ranger station mound. Hurricane Wilma destroyed the station. Here is an image that shows the mound and the ranger station before and after the hurricane: 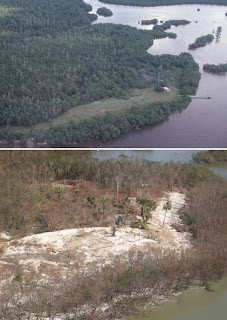 Our first day route would leave from Outdoor Resorts and through Rabbit Key Pass towards the Gulf. The winds were out of the SE at 10-15 knots and the temperature was very warm. Our mileage was about 16 miles with a few stops to take pictures and I would troll through areas that I had good action in the past. Mainly behind Crate Key, and areas near Mormon Key and the New Turkey Key. 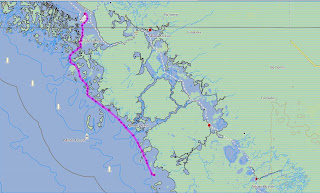 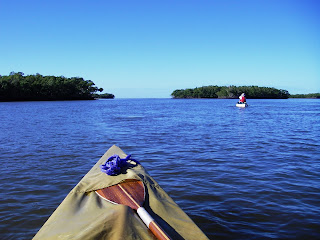 The outside was alive with large schools of mullet and more sharks than I have seen in a long time. Reports from Capt Wright are that large redfish have been caught in the shallow coves. I sure would love to catch a big redfish! But for now I would be content with the many surprise catches as I troll. Trout is a very easy fish to catch while trolling and they are very aggressive. I am using a Strike King Zulu in the space guppy color along with a Cottee ¼ oz jig head with the barb crushed for quick release and less damage to fish. These plastics are made with an elastic stretch to them and I thought they would last longer that the usual Saltwater Assasin shad tails I typically use. Unfortunately, if you even slow down a bit the puffers tend to love the Zulu as well and just bite off a big chunk of the plastic. 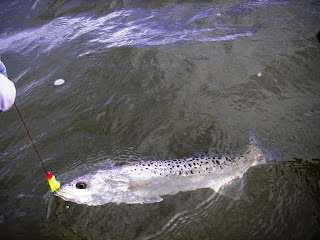 Connie and I made really good time and stopped for a short break at Duck Rock cove. The water was finally coming in and we were able to paddle closer to the islands. Today’s tide was a negative tide and there are exposed oyster bars as far as the eye can see. We saw no one out today but were hoping that our friend Alex would join us soon. He went out of the Everglades area ranger station and would take Sandfly Pass down. After lunch the winds started getting higher as we made our way through the Chatham Bend there I found the most action of the day with really large trout and even a small makerel.

Finally I get a call on the VHF it is Alex, he is passing to the south side of Pavillion Key! Wow, he really made good time!

We decided to camp on the side of the island receiving the most wind as the temperatures were climbing and the bugs would soon be out. We arrive at 3:30 pm and quickly get to making camp and getting dinner started, nightfall and the bugs would be here at dusk. 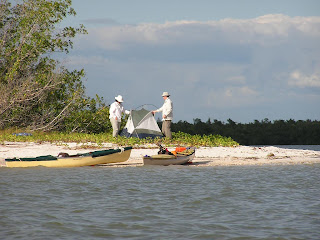 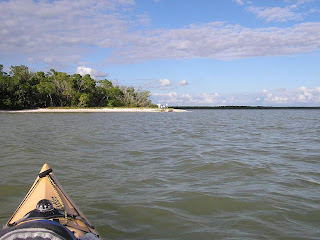 The next morning we were on the water at sunrise and it was spectacular. My friends TJ and Joyce in Englewood, FL were saying goodbye to their son and brother, Brian. The ceremony would be at Snook Alley at sunset. I said a prayer for them and for Brian. As soon as I finished, over 100 white pelicans took flight from the Plover Keys with the sunrise in the background. The timing of this event was another magical moment in the Everglades for me. How grateful I am to be here.

Today’s route would take us from Turkey Key to the mouth of the Lostmans River where we would stop and try to find the entrance to the old ranger station site. In Johnny Molloy’s new book it shows the mound just north of the old dock pilings. After our break we will catch the incoming tide up to Lostmans 5. 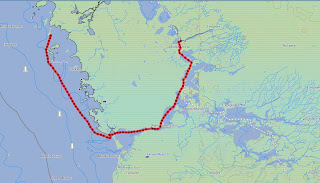 I turned on the VHF to get another weather forecast and it has not changed, 15-20 from the E/SE. Well that just makes it harder to take advantage of the tides today so we plan on a short break to compensate for the extra time it would take to paddle up the Lostmans River. It was a long day paddling 18.5 miles and stopping for a hike. What made it even worse was navigating the almost dry conditions at the mouth of the Lostmans. We finally just got out of the boats and walked them into the deeper water. Between the high winds and lack of water it was impossible to make much headway by paddling. We all finally make it to the area where the old dock pilings were still visible. 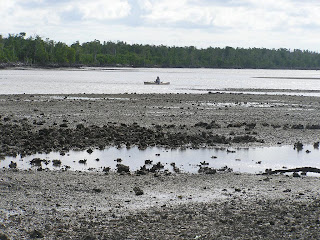 Following the information in Johnny Molloy's book we find an opening in the mangroves and work our way up towards the mound. There was nothing but a few supports that held the walkway, an old cot with pots and pans strewn about and what looked like parts of the old antennae. I did like stopping for lunch here when the old ranger station was still up, I've even seen deer up here. It's now overgrown and difficult to walk through. 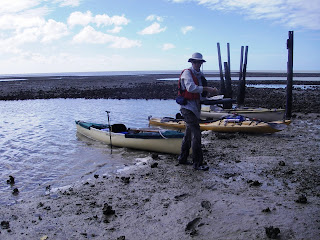 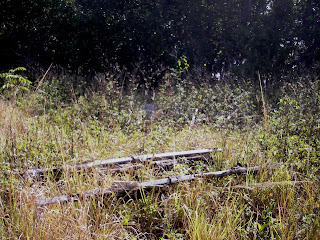 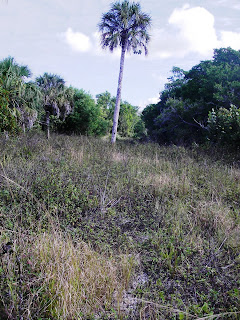 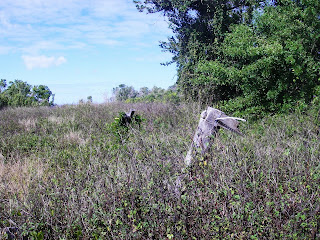 The trip up to Lostmans 5 was tedious against the gusting winds but once up past Onion Key we were making good time again. We arrived at Lostmans 5 at around 3:30 pm and would again concentrate on making camp and an early dinner before the bugs arrived. The welcoming committee were a couple of vultures that were not happy with us there. Eventually they would give up and just watch us from above. After we set up camp we pulled out our chairs and stash of wine to watch the sunset. Another great day on the water! Tomorrow we head to Darwins Place where I will finally have some time to fish. 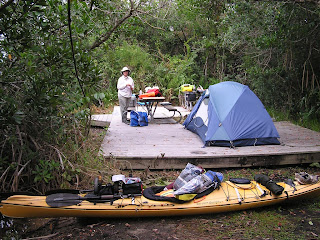 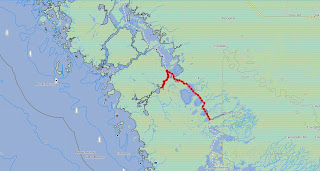 Today would be a short day with a start at first light to Darwins just 8 miles away. Once there we would quickly set up camp before anyone else shows up to take the best sites. This is a very small camp with plenty of visitors throughout the day. I don't particularly like camping here but it is very close to Gopher Creek where I like to fish and Connie loves to take pictures at.
The day was cloudy with more wind and the promise of rain. I did not mind the clouds it made the unbearable heat tolerable. We paddled through clear glass waters along a beautiful series of bays and creeks. This is one of the prettiest parts of the Wilderness Waterway.
When we arrive at Darwins we are pleased no one had arrived or was camped there. So we chose our best options and pitched our tents. I had brought my St Croix travel road and 3000 series Shimano reel loaded with 20lb braid with 30lb mono shock leader. I attached a rootbeer with goldfleck swirl tail and cottee 1/4 oz jig head in red. I also had a new set of lures I wanted to try and put this small box behind my canoe seat. Here is what the campsite looked like upon our return with the new guests that showed up: 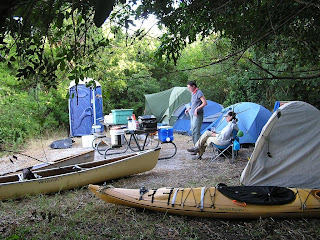 My canoe finally made it throught the first entrance only to have to give way to a powerboater that disturbed the silence. He motored along slowly and fished with the engine going the entire first creek. I couldn't get around him so just stayed behind and fished along the way. Not much action unfortunately. The water was very high and fresh with few gators on the banks. I made it to the first lake and finally was able to find fish. It was a very slow almost drag along the bottom retreive that they were after. Then the gusts of winds came with the rain but I continued fishing. The first fish to fall was a little redfish then a tiny snook even a very tiny tarpon that I lost at boatside. The slam was finished by catching a beautiful backcountry trout after I got out of the creek and trolled towards camp. It was alot of fun even if the fish were small and I was glad to have spent a relaxing day just fishing and exploring. 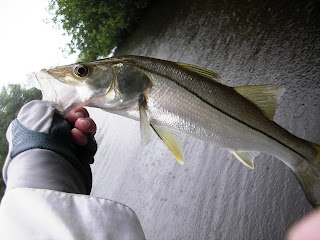 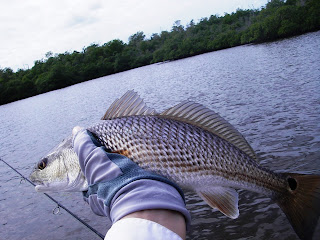 I want to link you to Connie’s slideshow not only so you can see the beautiful birds she was able to photograph while in Gopher Creek but better overall trip photos.

We got back to camp for a leisurely afternoon of dinner and cocktails. Our new campmates showed up they were a group of men from Aripeka, FL. They had been fishing all day without much luck. It is very different on the outside where the fishing has been much better than back here this season. I shared with them my last successful spot at Gopher hoping they would also find some fish. They left and later returned with smiles on their faces. We all had a great evening and made new friends.

Connie, Alex and I discussed our next days trip. We would have excellent weather so we all decided to try the north Huston Bay creeks and connector ponds to get to Sunday Bay. I've been meaning to do this route but have not had the opportunity. It is quite beautiful but I would not recommend it with any kind of N/E high wind situation. There are many shallow areas that can have water blown out by days of high winds it is also very exposed with few places other than the creeks (which are plenty deep) to get shelter. In these situations I still prefer my House Hammock route. 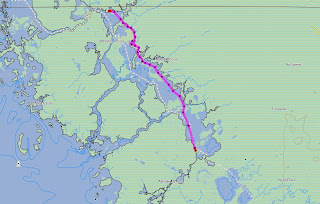 This route ends at Sunday Bay and you have a short paddle through some shallows to finally get the chickee into view. Once we arrived it was still early and the tide was still going out of the Lopez. We pondered on whether to stay or head back home tonight. The only reason we thought about leaving was because of the heat and how bad the bugs were at night. But in the end that was all preferable to coming back and turning on the cell phones, reading the tons of work related emails and dealing with the treadmill of life.

Here are some images to what those creeks and ponds/bays look like: 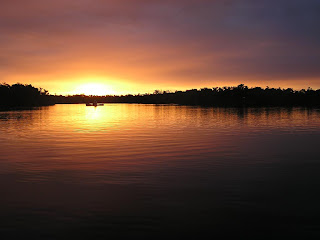 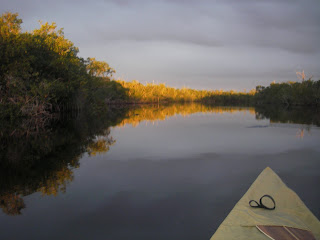 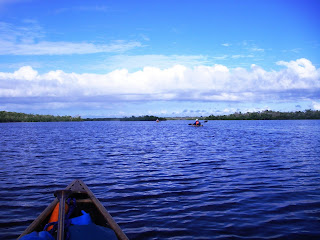 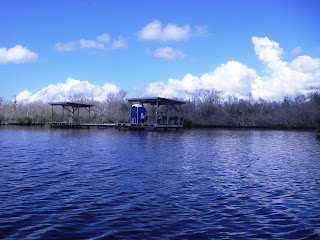 The final day had us leaving Sunday Bay Chickee and heading down the Lopez to arrive at Outdoor Resorts before 10 am. 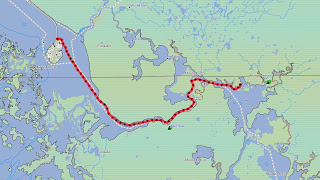 Until next time my beloved Everglades, see you in December :-)
Posted by Vivian at 12:41 PM No comments: