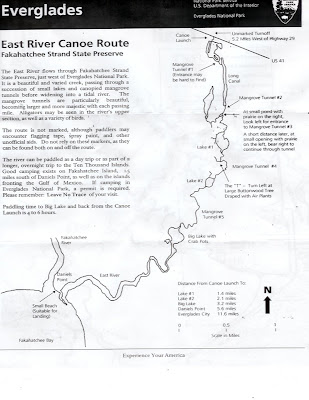 As Stubb pointed out in my last conversation with him, water levels are VERY LOW as a consequence of the strong northerly winds. Chokoloskee Bay looks like an oyster farm. The water levels in the Fakahatchee and Big Cypress are low as well.
Hmmm....this could be a recipe for a disaster! 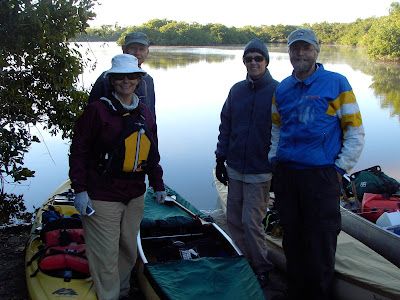 Three of my favorite and very experienced backpacking buddies from the Florida Trail Association were going to join Connie and I on an overnight paddle trip to Camp Lulu. With the weather forecast at 15-25 mph north winds we decided to cancel the Lulu plans and do something easy. We decided to paddle down the East River and if the weather was favorable continue the mile long paddle across Fakahatchee Bay to camp on Fakahatchee Island. We were excited because there is alot of history there at that island including the remains of an old cemetary. Both of my backpacking buddies had never camped there. This island however is horrible to camp on in nice weather because of the bug situation. You need a stiff cold wind to enjoy the place.
David Robinson and David Denham were sharing a heavy aluminum flatback canoe. Fred Haas was in a sit on top kayak and we were in our lightweight skinny solo canoes. The trip down the East was easy and Stubb had mentioned that the problem we experienced in December was taken care of by one of the local guides. We had a huge branch blocking tunnel 5 preventing passage to the bay back in December.

So we get out of the river and into the bay and notice that there is very little water in it. 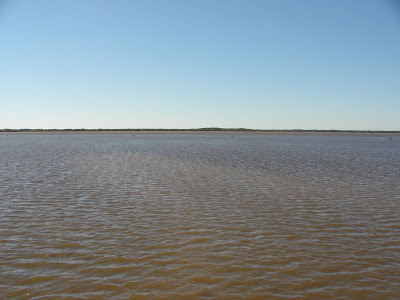 We decide to wait for the incoming tide at noon and have some lunch in the lee of the cold north wind. Both Davids in their canoe had tried to go out into the bay and were now high and dry. With their heavy aluminum tandem canoe they could not get to where we were. Hopefully in a couple of hours they will float free. Two hours later they were still high and dry and the water was not coming in. It was STILL GOING OUT! 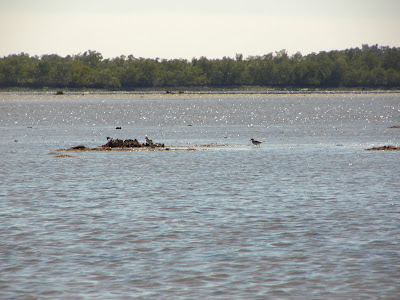 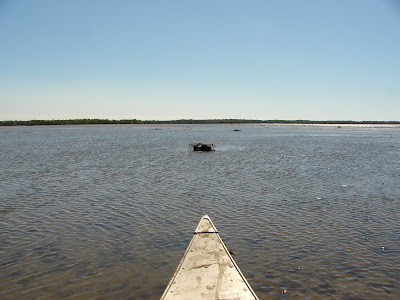 It was now 2 pm and we had to get those two guys into deeper water and paddle back into the East River. They wanted to wait it out but I convinced them that it was going to be a long paddle back up the East River and we had to get back before dark. It was going to be very cold that night. There were no assurances that the tide would ever come into Fakahatchee Bay. We could not stay in that open bay with those cold north winds blowing all night. Better to get stuck in a windless mangrove tunnel. Both Davids had to get out of the canoe and in thigh deep mud and walk it back to the deeper water. It was now 2:30 pm.
We had a hard go into the East River because the water levels had gone
down an extra 2 feet and the creek was almost without water in places. 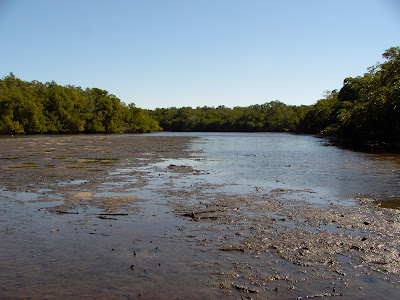 Luckily we brought saws and pruning sheers to cut through the snags. But one in particular where the guides tried to cut was not passable at mean low tide. Out came the saws and much cutting and balancing on a tree limb over deep water. 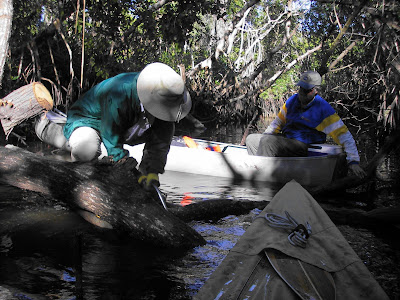 The boys did it and we all came through that snag but it was still the beginning of mangrove tunnel 5, we had a long way to go. I was wondering when and if we could find a way out of here before dark. Most of us were wet and cold and the way through was so difficult for the guys in the aluminum canoe and they were exhausted from pushing and pulling the boat through the snags and deadfall. The three of us in single boats were gliding through most of the stuff but we had to wait for them to get through. 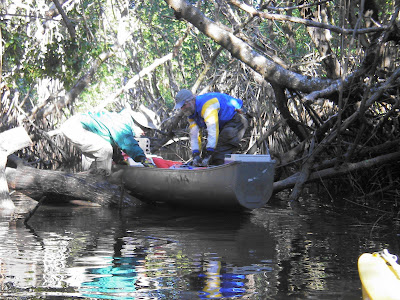 At mangrove tunnel 3 we noticed the snags were not so bad and we were now into a more freshwater area not as influenced by the tides. Hope was in the air that we could get back before dark. Meanwhile we decided to start looking for a place to pitch a tent or just cook some dinner, get our headlamps out and work with the worst.
As the sun was setting we find the opening to Long Lake and now we are almost at the car we left at the put in! Wow, this could have ended badly if we were not prepared to spend a night out here! Luckily we were prepared with extra warm clothing, headlamps, and mylar emergency blankets. If things got to where we had to stay in our boats I would've found a shoreline to get my gear onto and laid my thermarest on the canoe bottom. I bring a Heat Sheet emergency blanket/sleeping bag in my ditch bag. We would've used our camp stoves to heat up a hot dinner on one of the dried up mud banks.
A radio, VHF, flares and cell phones (which we all had) would not have worked to help us. In this situation no one could've rescued us unless it was a helicopter rescue $$$$. We just had to wait until the water levels would rise just enough to float us through. I add this to my blog in hopes that if any of you are like me, looking for adventure in new places. Bring along a drybag with essentials to spend the night out in warmth and to keep dry while in your boat.
Posted by Vivian at 10:33 PM No comments: